An “object explorer” or “object inspector” is a visual tool that provides a GUI mechanism to explore and navigate the hierarchy of a saturated FoxPro object. This allows you to see all the property names and values that live on an object, and any nested hierarchy that is often present on complex objects like Business Objects.

In my studies of this type of tool, I have come across three available choices. If you know more, please leave a comment, and I’ll add them to the article so that we can have a complete list.

Three tools are reviewed in this article:

At SWFox 2008, I saw Mike Feltman present a session on FoxPro Collections, and in that session he briefly showed what he appeared to regard as an incidental tool he had developed, which he called “Collection Explorer”. Even though it has “Collection” in the name, it actually works on ANY FoxPro object, so I quickly used this tool to take a peek at one of my relatively complex West Wind wwBusiness business objects: 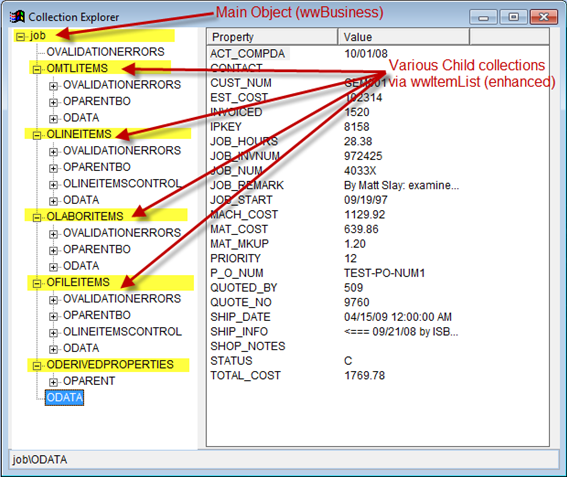 I became really interested in this tool, and instantly added it to my FoxPro IDE toolbox (after bugging Mike for a few weeks to release the final version which he promised in his session). I even integrated it into my production app as a way to allow advanced users to dig around in ways that were not provided in the main forms of my app.

In my typical fashion, I also began to dig around and stir the pot in the community about this problem space, and somehow that lead me to another tool called the CodeMine Object Inspector.  You can download it from here: http://www.codemine.com/ (under the Free Developer Tools). The source files are dated 1999, which is kind of old, but it seemed to work fine in my initial tests in VFP 9 SP2.  Here is a screenshot: 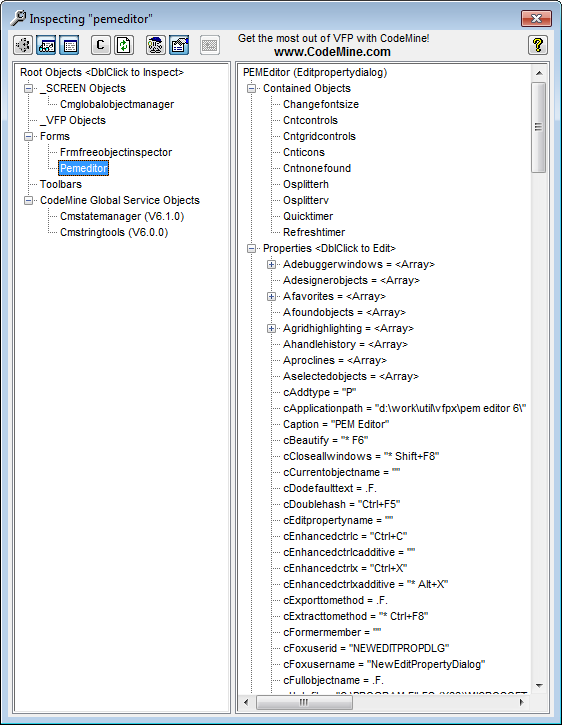 I have not used it extensively, but at first glance, it seems to cover all the basics that the other tools do.

Sadly, I did not attend the SWFox 2010 conference after having made my first SWFox conference in 2008, and again in 2009. I first heard about Tamar’s Object Inspector from Jim Nelson, the author of PEM Editor on VFPx, who was at the 2010 conference. We spoke daily during the conference so I was able to keep close tabs on everything.  One of the updates he gave me was that Tamar Granor made reference to an “Object Explorer” tool that she was developing. Following the conference I asked her about it on UT, and sure enough, I eventually saw it for the first time in November 2010. In mid-December 2010 she released a second iteration to a small group for testing and feedback.

There will be an article on the Object Inspector in the January 2011 edition of FoxRockX.

Release plans: She has stated that her plan is to submit the Object Inspector to VFPx. I don’t know what her expected timeline for release is, but I’ll keep you updated as I know more about it.

Here is a screenshot: 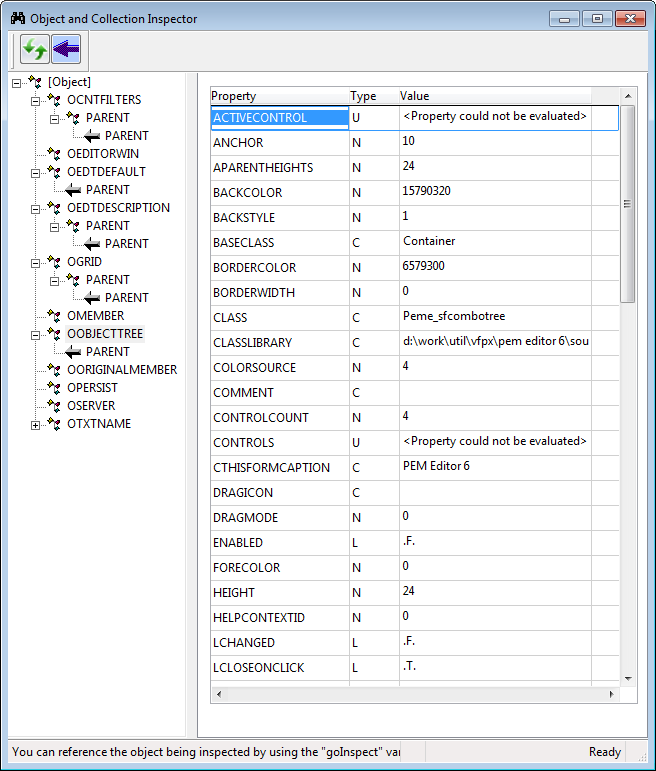 2 thoughts on “Object Inspectors and Explorers for FoxPro”